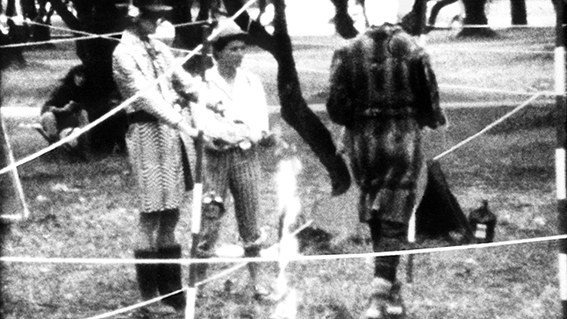 These works represent early experiments into different forms of performance. I was interested in the form of a performance, what type of structure/s could be imagined. I sought to understand how time, action and concept might work together.

Grid 1977, a performance work involving a variety of actions in contained spaces. Each action was performed within the performers designated cell of a grid. The grid was delineated by rope tied between trees within an olive grove. The participants were asked not to reveal their intended action to myself or the other participants prior to the performance. 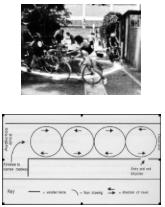 Bicycle Race 1978, began as a pencil drawing of a double helix. I transferred the drawing onto a public road using 25 kg of flour. The flour was laid onto the  bitumen surface of the road in a pattern similar to the diagram shown above. The performance began with a bicycle rider cycling around the line of flour. After two circuits another cyclist entered, fourteen cyclists entered in this way. At first the action was fluid, the cyclists moved in harmony weaving around the pattern. However, as each new cyclist entered tension grew because it became increasing harder to avoid collision. At a given signal “stop” the cyclists left in the same manner as they came i.e. one at a time after two circuits. The performance lasted about 20 minutes.

9AM-5PM 1979, was a durational performance lasting for an average (Australian) eight hour working day. Dressed for work and accompanied by two light-bulbs and two mounds of salt two performers lay head to toe for the full duration of the performance at the Experimental Art Foundation in Adelaide, South Australia.

One character an ex-military officer walked back and forth across the gallery in uniform until he was marching quickly. Another carried out strange and smelly experiments using uncertain chemistry. Another lit and consumed twenty cigarettes simultaneously. These and other actions gained a chaotic intensity until the participants left the space according to prearranged cues. Throughout the developing mayhem and until the end two figures (myself and a friend dressed in identical clothing, with identical haircuts) remained seated, silent and still. The wall behind was decorated with hand painted signage, typical of the time, that advertised; unidentified sales, unidentified consumer opportunities, and cheaper products. This was an expressionistic performance relying entirely on a slowly developing crescendo of action. Whilst a very different work in content and look, structurally the work relates to later works such as; Bicycle Race 1978 and Fill 1990.