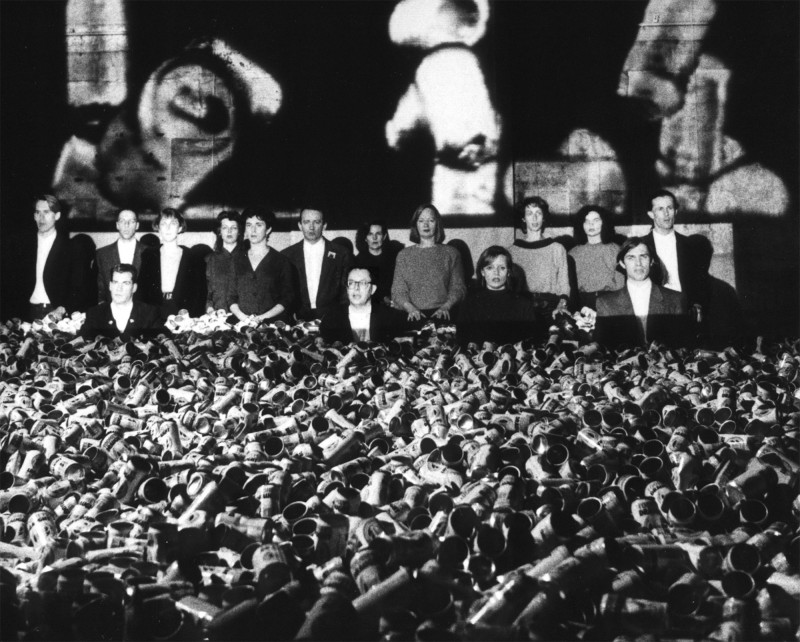 Fill 1990
A thirty minute performance commissioned for the 8th Biennale of Sydney: The Readymade Boomerang.

Fill, consisted of a sixteen-person chorus uttering the word ‘everyone’. Beginning by silently mouthing the word ‘everyone’ the chorus slowly transitioned into a whisper. Over a period of thirty minutes the sound built to a vocal crescendo. The performers sat on small stools beneath 28,000 loosely mounded beer cans.

Projected text and other video imagery were intermittent, occurring at predetermined times during the performance.This culminating performance in the Everyone series was defined by a chorus that articulated, principally, a single word in repetition. As if the performers were trapped and had always been trapped, entrenched in habit or an habituated culture. The Irish playwright Samuel Beckett (1906 – 1989) wrote in Waiting for Godot, ‘Astride of a grave and a difficult birth. Down the hole lingeringly, the gravedigger puts on the forceps. We have time to grow old. The air is full of our cries. He listens. But habit is a great deadener (1954, p59).