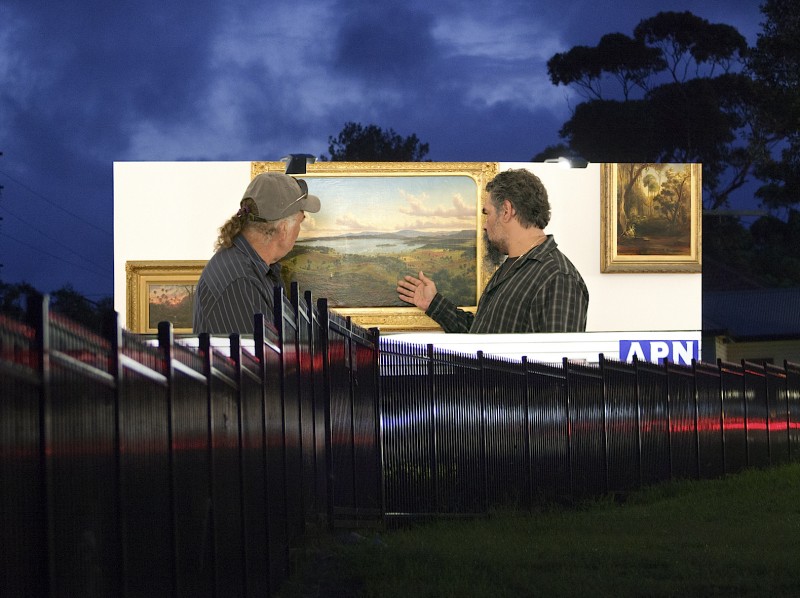 The photographs from this series were exhibited using advertising billboards, located each side of the Southern Freeway on the border between the Illawarra and the Sydney metropolitan area. The images are named: “Roy takes a breather after showing Kelton the best fishing spots” (travelling north, Waterfall, NSW) and “Strewth” (travelling south at Heathcote, NSW). Both photographs show two Indigenous men standing in close proximity to a painting by Eugene von Guérard (1860).at the Wollongong Art Gallery called View of Lake Illawarra with distant mountains of Kiama.

With images that are coolly precise and quietly performative, the apparent everyday quality of the scenes typically belies the web of temporal and perceptual concerns that cook and simmer with prolonged looking. Driving around the gentle bend and over the crest of the road on the approach to the “Strewth” billboard at Heathcote, the immediate impression of encountering two large-scale figures looming over the traffic with their backs turned away from the stream of passing cars was almost disconcerting in its denial of the viewer’s gaze. But following the direction of their line of vision into the painting, guided by Pell’s gesturing toward the von Guérard with an outstretched hand, absorbs the viewer into the men’s shared act of observation. Momentarily, looking takes on a surprisingly participatory dimension. For the drivers who passed the billboards on their daily route along the Princes Highway the back story of the images’ construction would have been irrelevant—what the observant driver encountered was a puzzle, a cryptic story with a network of referents that yielded more clues with each repeat viewing, while refusing any revelation.
Ella Mudie 2012.

Just another moment in time…and then some, Ella Mudie